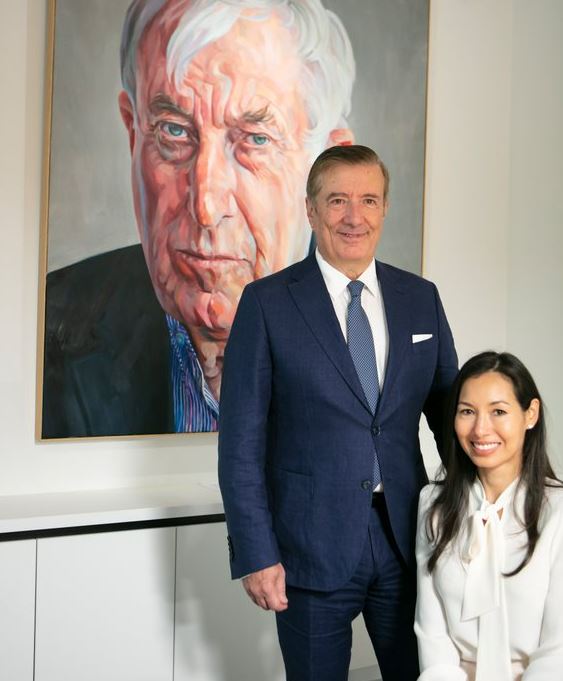 This mission-driven, globally connected research program will enable rapid design and development of treatments for pathogens of pandemic potential. The Centre will advance the science behind antiviral therapeutics, transforming the management of future pandemics and saving lives.

Born into a medical family in Kingston, Canada, Geoff went on to become educated in economics at the University of Calgary, The London School of Economics (LSE), and the University of British Columbia. He initially worked in tax and international economics within the Government of Alberta before moving on to the Global Energy Group of the Royal Bank of Canada. Geoff led the bank’s venture capital group in Western Canada and then joined Peters & Co Limited, the Calgary-based investment dealer, as a partner.

Geoff has been a director of over 30 companies in Canada, New Zealand and several other countries and he has chaired companies in solar and other energy technologies. One early-stage company, Ryman Healthcare Limited, where he is the largest shareholder, has grown to become a $5 billion pre-eminent integrated retirement company active in New Zealand and in Victoria, Australia. He has been, and remains, engaged in property investments in various countries.

Geoff is active in global philanthropy. He made one of Canada’s largest donations by gifting more than C$100 million towards long-term medical research at the University of Calgary – a contribution that was matched by the Government of Alberta. He has supported many international charitable organisations involved with public health, sanitation, the environment, global over-population and other critical world issues.

Geoff lives in Melbourne. He and his wife, Anna, have two children.

Following the launch of the CGCPT in Melbourne, Geoff and Anna told us about their motivation for the gift and the impact they would like to see at the Centre in the next 10, 20 and 30 years.

How did your journey to philanthropy start and what areas are you most passionate about?

My father, who was a doctor, and my mother, who sat on the admissions committee of a medical school and is now over 100 years old, have had a big influence on me. They instilled in me an interest in medicine and a strong sense of social responsibility.

When I was a young boy, I was mesmerised by the American and Russian space programs. I was impressed by their long-term orientation, incredible technology and audacious objectives, and by the way technological breakthroughs could transform the future for the better.

While I have supported and continue to support public health, sanitation, the environment, global over-population and other critical global issues, I had been looking for something big and transformative that combines medicine and technology.

What issues keep you awake at night and how could these be impacted by philanthropy?

We need to increase the resiliency of the global community during the next pandemic. I like to think of societal cohesion like ice on a pond; pandemics and other crises put stress on the ice, and if the ice is too thin it may crack or break. By developing more tools to manage these crises we are strengthening the ice. That’s where I feel this gift could make an enduring global contribution today and in the decades ahead.

How did you arrive at the decision to give so generously to establish the CGCPT?

All of us want to live in a safe and healthy world. We want our families, our jobs and our communities to be safe and properly functioning. Pandemics threaten all of this, as the world has witnessed during the Spanish flu a century ago, during the AIDS crisis over the past 40 years, during SARs, MERs, Ebola and especially during COVID-19.

This pandemic has had a profound impact on society. There have been millions of fatalities and many people are going to be impacted by mental health and long COVID issues; and there's also the economic cost of perhaps US$30 trillion in lost output.

What made you choose Australia and, in particular, Melbourne when considering the location for the CGCPT?

I had three goals for this gift: I wanted to make a gift to humanity, I wanted the gift to be in technology that will advance science and transform the future, and I wanted to leverage off Australia’s outstanding response to COVID-19.

I am very pleased to locate this Centre at the University of Melbourne and right here at the Doherty Institute. We are delighted to work with the Victorian Government, with the Commonwealth, with globally leading philanthropic organisations and with other donors and partners. This Centre is here in Melbourne due to the sustained investment in medical research by the Victorian Government, by the breadth of the medical research ecosystem here, by the collegiality of all the players involved and, in part, because of the relatively successful response by Australia to the COVID-19 pandemic.

Our family has met many Doherty Institute staff and we have seen and felt the terrific culture here. You want to bottle it; you do not want to lose it. And we just need to carry that culture and dedication to outstanding research across to this new Centre and replicate it there.

What impact do you hope CGCPT will make globally over the next 10, 20, and 30 years?

I think we should have a really long timeframe – maybe 40, 50 or 60 years. Ten years out, there should be some real indication that we've got meaningful success of some type – not full success, but meaningful success. We would have added to the stock of human knowledge, a new platform and a new pathway.

‘Blue sky’ or discovery science is the hardest science. It’s important to create the sense that there's no such thing as failure per se. It is impossible to predict which areas of inquiry will lead to the next breakthrough, and we want an environment where people can take risks knowing that many avenues will lead to dead ends but that a few may lead to truly novel discoveries. We have high aspirations for our people and our results, but we recognise this will be a winding path forward and upwards.

We've really got to get people to feel there are no limits. We've got to allow people sufficient scope to really take risks and try brand new things, and then look at it down the road, and hopefully we will have accomplished that. Our family hopes this new Centre will create meaningful advances in this area of global science and will help make the world a safer place in the face of the next pandemic.